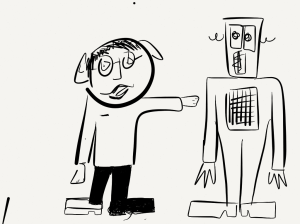 Some of the same people also thought that whenever they met Juniper out and about, that she was reporting live for some reason or other, and so they were somehow part of the story. Even the obvious absence of cameras and other news-reporting equipment didn’t stop people believing this.

‘They can build a camera so small nowadays that it is only visible to house flies, microscopes and scientists.’

‘Juniper’s left eye is a camera lens and whenever she talks to anyone, she is simultaneously transmitting live footage to the watching world.’

‘Juniper has a microphone embedded in her index finger and this gives her the real edge when it comes to news reporting.’

‘Juniper’s feet are actually the metal feet of a tripod that were grafted onto her body whilst she was on a so-called ‘holiday’.

‘Juniper has gills inserted into her neck so that she can do interviews in monsoons, waterfalls or underwater.’

As you can imagine, it was hard work being Juniper Jarvis but she would never let this get in the way of doing her job.