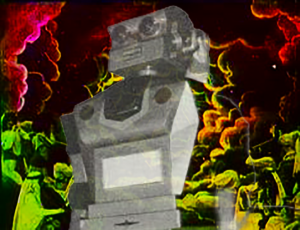 Straight away, ‘Donny’ stopped struggling. The superheroes let go of him. Oily, sparky froth started coming out of his mouth and ears.

‘We are one-thumb, two-thumb good,’ gurgled the Troublebot disguised as Donny. ‘Bringing joy…’ the singing stopped as the vocal circuits began to melt and fuse together. ‘Donny’ gave a foamy, sparky, belchy, gaseous, shuddery shudder before collapsing onto the ground.

‘Hooray,’ cheered Doodah in a hitherto unexpected, and never to be repeated, moment of group harmony, ‘you superheroes and your young friend have really truly saved us.’

Falcon Boy and Bewilder Bird bowed and start posing in their usual triumphant ways, as Ellis started untying the band.

‘Don’t worry,’ said Falcon Boy, with his chin pointing to the sky. ‘That wasn’t really the real Donny we just superheroically destroyed, it was merely a Troublebot disguised as your drummer.’

‘You don’t say,’ thought Ellis, but she didn’t (say anything). Ellis noticed a knocking noise coming from a trunk in the corner of the dressing room. She opened the lock on the front and out jumped the real Donny.

‘That’s our Donny,’ cheered Daphne, Deirdre and Davey, in a weird repeat of what had seemingly been an unrepeatable moment of group harmony.

In fact, so stunning was this piece of vocal synchronicity that the members of the group looked at each other in astonishment. However, before they could do any more than register the thought that something might require some further thought – a possibility as strange to Doodah as the synchronicity itself – there was a knock on the door and the stage manager stuck his head into the room.

‘You are due on stage in one minute,’ he said.

The shared thought, and the potentially life-changing possibilities inherent within its delicate DNA, were shattered by this new news and fell silently to the ground to lay like the promise of an alternative future all broken and smashed into tiny, silent, sullen shards.